GM Davis became an avid competitor in tournaments from 1974 until he retired in 2000, winning many state, regional, and national honors in both forms and fighting. His philosophy regarding students is simple: When they come to him to learn, they are putting their lives in his hands. He stands as a man of honor and respect to all his fellow blackbelt brothers and all students.

GM Davis still teaches and practices Kenpo with his top blackbelt Billy Dalton at his Troy, Illinois school.  GM Davis retired from the US Army Reserves as a Lieutenant Colonel in Military Intelligence and Special Operations. 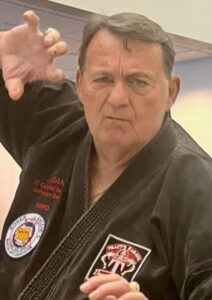 “Through all adversity comes Greatness!”