Master Billy Dalton started his Kenpo Karate training in 1991 under GM Jefferson Davis at his Tracy Karate School in Granite City, Illinois. He currently holds the rank of kudan, 9th degree black belt.Billy was a hard charging student and earned his shodan in 1994. This was a remarkable achievement due to the demands of the school curriculum. An avid competitor, Billy began competition as a yellow belt and over a 25 year competitive career, excelled in both fighting and forms. In his 25 years of competition, he won numerous local, state, regional, and national titles. He was a top-rated fighter in NASKA for several years placing at the top in both forms and fighting.Master Dalton has owned and operated Tracy Karate in Troy Illinois for 24 years, producing excellent students and several NASKA national champion fighters. He promoted the “Land of Lincoln” Karate Championships for several years as well as helping his instructor, GM Jefferson Davis manage and direct several of his St. Louis Budweiser National Karate tournaments. His other teaching endeavors over the years include GOE Seminars with GM Davis; women’s self-defense classes, the Boy Scouts, and courses at the local high school. 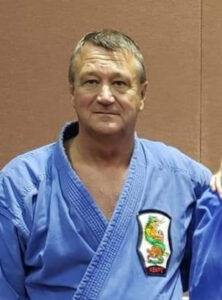 Master Dalton’s honors are many and include induction into the Midwest Martial Arts HOF in 2004, the Kenpo International Hall of Fame in 2009 and the USA Martial Arts HOFs in 2009 and 2012. He was also awarded the St. Louis Budweiser National’s Lifetime Achievement Award, and awarded both the Kenpo Lifetime Achievement and Spirit of the Warrior Awards by Great Grand Master Al Tracy. Billy Dalton is a professional Kenpo Master in every respect. He follows in the Martial Arts Ethos of GM Jefferson Davis and his teacher, Hanshi Roger Greene (RIP). Billy serves on the Tracy’s Kenpo Senior Associate Council.