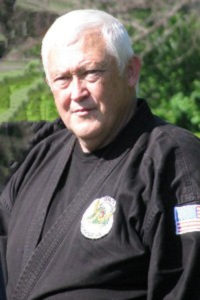 Mr. Gary Avery (Kudan – 9th degree Black Belt) started his martial training with wrestling in high school and maintained that training through college. He started his training in Kang Duk Won during his junior year in high school where Jim Stewart and Roger Greene were also studying martial arts.

He continued his martial training in Kenpo under Jim Stewart after returning from Vietnam, and later successfully ran martial arts schools in Kentucky and California. Mr. Avery is a Certified Master Instructor for the Tracy’s International Studios of Self Defense.  He is an inductee and a charter member of the Kenpo International Hall of Fame since its inception in Chicago, IL on June 23rd, 2007.

He regularly attends various martial arts and Kenpo seminars to share his vast knowledge of martial arts and to demonstrate his energetic, power-oriented, and unique fighting method. His passion for teaching martial arts is apparent during his seminars as he covers simple to advanced concepts of Kenpo, boxing, and kickboxing.

His love of martial arts will likely lead to the opening of a new martial arts school after retirement from his current position.  This will allow for more availability and flexibility to focus on new students.